The concept of deferred / pending settings in the Bios and SmartStorage subsystems of HPE iLO 4 and 5 is briefly presented in the HPE Reference API documentation. With two examples, this document illustrates what is happening when properties are modified in those subsystems using the Redfish REST API against HPE servers.

We assume that the reader is familiar with REST APIs in general and Redfish in particular. A good entry point for developers to grasp the power of Redfish is the iLO RESTful API Ecosystem.

For didactic purposes, we use direct URIs to targets instead of crawling the Redfish tree to discover the target URIs, as explained in the Getting Started with the Redfish(c) API Part 2 document.

In the following paragraphs, {{Subsystem-URI}} refers to an URI like https://<ilo-IP>/redfish/v1/<subsystem>/ where <subsystem> represents either Bios or SmartStorageConfig. These subsystems contains the currently used properties.

Each of them has a pending sub-zone called Settings/ and explained in the next paragraph.

The important thing to note in this flow is that the final status code and associated message of a property setting is visible after the system reset.

In this example, we create a Raid1 storage array of two physical disks using Postman.

As mentioned in the HPE Redfish documentation, we have to issue a PUT to {{iloURI}}/redfish/v1/Systems/1/SmartStorageConfig/Settings/ with a body (aka payload) similar to the example shown below: 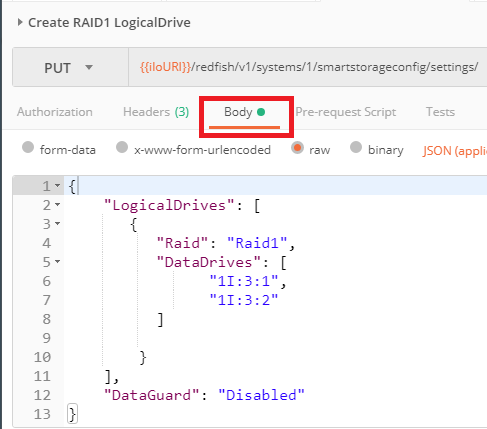 Upon successful completion of this PUT request, the HTTP status return code is 200 OK, which means that the remote Web server understood what to do with this well-formed payload.

The Body of the HTTP response contains an error property with a SystemResetRequired message. This property is a Redfish object sent by the Redfish server. It is there to give details about the next step to perform to finish the modification process. 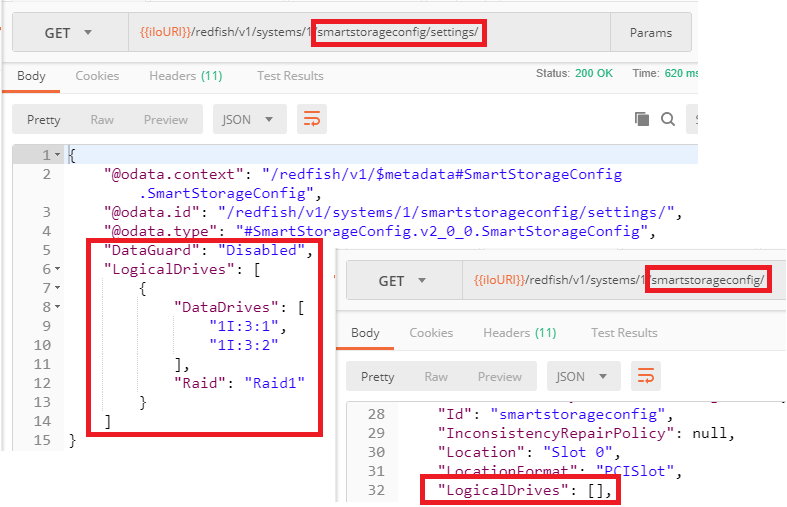 It is now time to reset the server and perform a GET of the running zone. In the response body of this operation, the first Redfish object is a @Redfish.Settings collection containing a single MessageID mentioning Success. This single message is synonym of a successful transfer of the "pending zone" in to the "running zone". We will see later in this document what we get in case of an un-successful transfer. 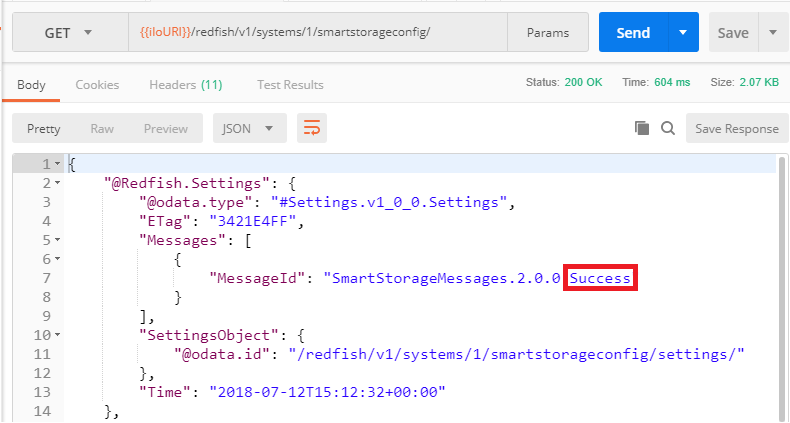 Further down in this response we find the LogicalDrives array containing the Raid1 disk array: 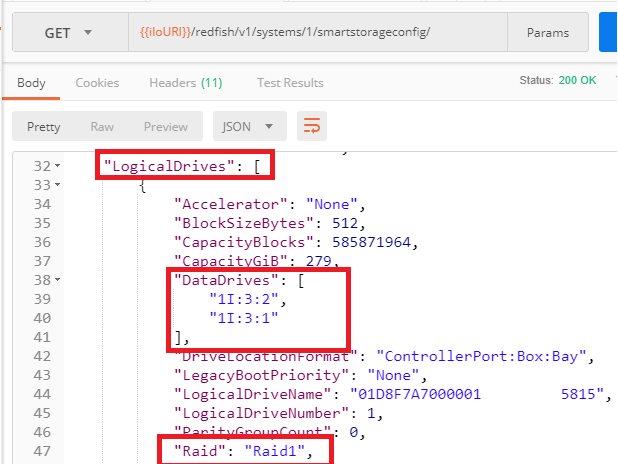 In order to emphasize the fact that the modification status of properties in the Bios and SmartStorage subsystems must be done after a system reset, we will study a case where the JSON PUT payload is syntactically correct but embedding a value typo (Raid instead of Raid1) and missing a required key-value (DataGuard=Disabled): 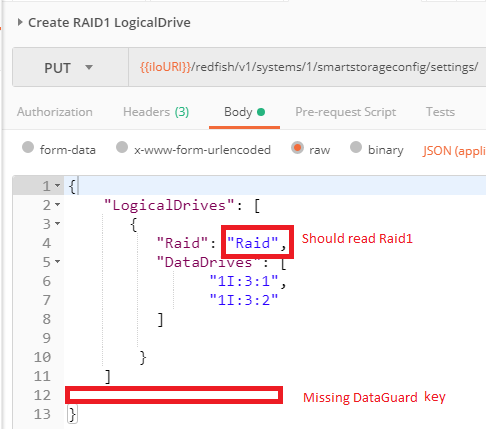 Sending this request returns an HTTP 200 OK status and a SystemResetRequired Redfish message just like in the previous example: 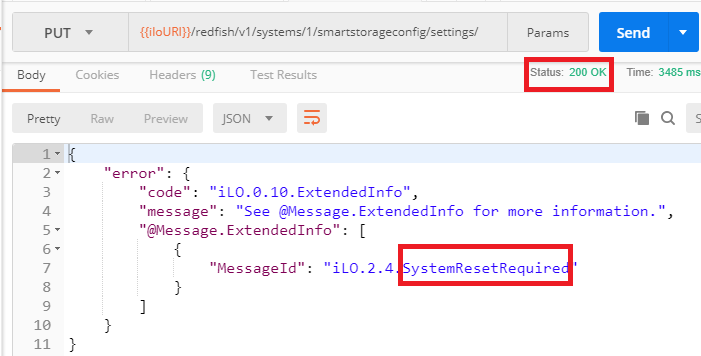 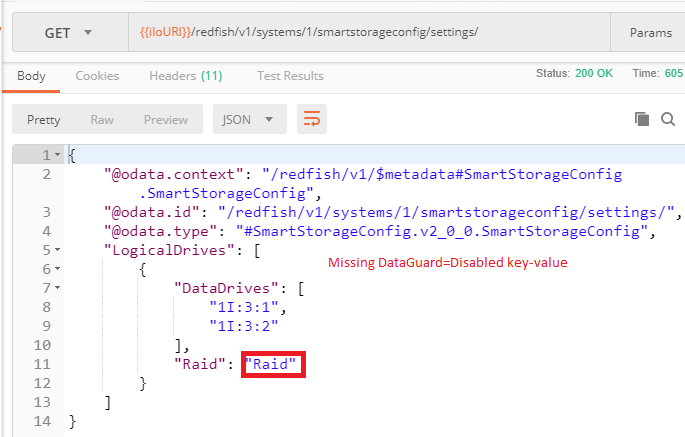 After the server reset, a GET of the running zone responds with a MessageArgs=[DataGuard] object and two MessageIDkeys. The first one mentions DataGuard as a missing property and the second one (Success) means that the analysis of the transfer from the pending zone to the running zone has successfully ended. This Success message does not means that the transfer has occurred.

Moreover, note that there is nothing mentioning the Raid typo. It means that analysis of the payload to transfer stops at the first error found. 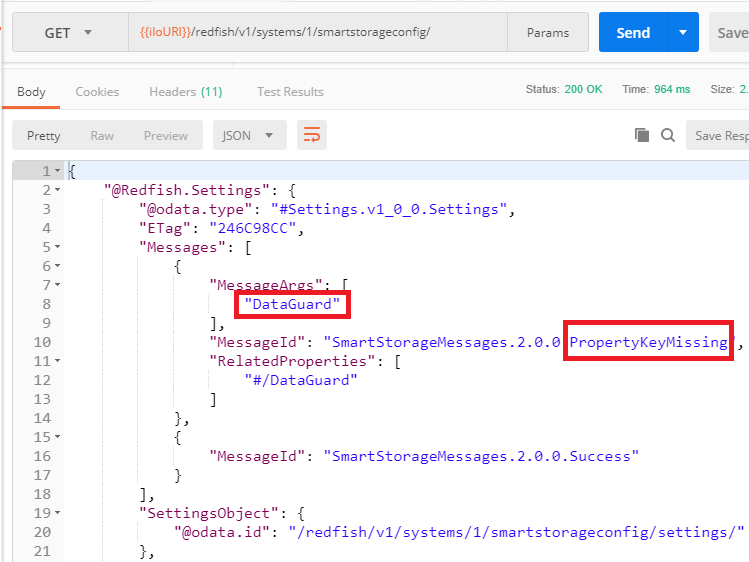 If we drill down to the LogicalDrives array we notice that it is still empty. Hence the transfer did not occur.

If we PUT a new payload with the DataGuard=Disabled property but still without correct Raid level and reset the server, we notice an InvalidRAIDLevel message explaining the problem.

Understanding the pending / deferred process when modifying Bios and SmartStorage properties using the Redfish API as well as the different types of return codes (HTTP, MessageID...) should ease program development and troubleshooting sessions.

Contribute to the HPE Developer Blog