The ability to store and retrieve JSON documents using the OJAI standard has introduced a very powerful way to work with data in your MapR cluster. MapR Boolean Access Control Expressions (ACEs) provide a powerful, easy way to enforce authorization for providing secure access to data across the MapR Data Platform including MapR XD, MapR Event Store, and MapR Database.

Access control using ACEs can be administered at multiple levels, separating administration and data access operations. Permissions for operations like creating a column family, deleting a column family, or setting ACEs can be controlled by setting ACEs as a part of table properties. If you are not familiar with the concept of a column family, just think of it as a logical grouping of data elements for setting a consistent policy (like permissions, TTL, etc.) on those elements. This construct exists in the MapR Database wide column data model as well, though the underlying implementation is completely different in the JSON document model. In MapR Database JSON, a JSON document can be stored as a composite of multiple JSON sub-documents which are part of different user-defined column families. More information about column families in MapR Database JSON can be found at the Docs site.

Data access can be at column family and fieldpath levels within a table. In a JSON document, a field is the smallest unit that can be assigned a value which can be a scalar (integer, string, double, boolean etc) or a collection type (array, map). A fieldpath is a dot-separated set of fields. In fieldpath “address.home.street”, “address, “home” and “street” are individual fields—while “address” and “home” are map type, “street” is a scalar type.

Both column family and fieldpath level permissions work in conjunction to decide the final access privileges to a single JSON fieldpath or sub-document. 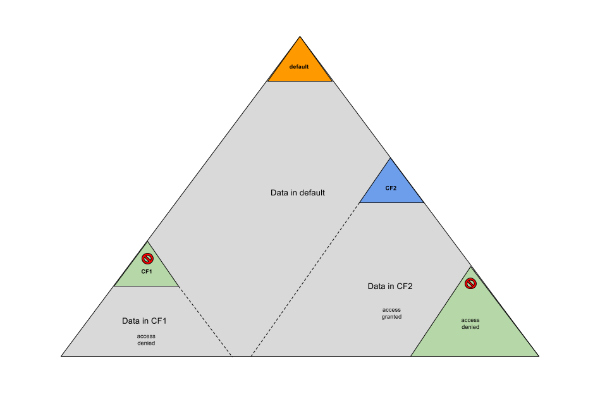 While the boundaries between the different subcomponents of a document are invisible to the developer using MapR Database, the way these components are laid out is important for the admin to administer security and ensure good performance.

With support for native JSON documents, we have extended ACEs to provide the most fine-grained control over your data’s security. Now, admins can set read, write, and traverse permissions for any user, group, or role, to any part of a JSON document or a JSON subdocument, down to a single JSON fieldpath, with a scalar value. This is independent of access privileges to other parts of a document. All this is possible while preserving maximum space efficiency and performance.

In order to provide the flexibility in enforcing access to data in MapR Database JSON, we introduced a new type of permission, called the ‘TRAVERSE’ permission, which will allow the admin to allow access to some users to some parts of the JSON document while masking access to the rest of the document. As the name suggests, this new type of permission allows ‘traversing’ a JSON document to be able to discover its ‘structure’ or ‘self-describing schema’, without giving away access to any part of the data without explicit permission.

Another example is a simplified version of a ‘Personnel Record’ that may be used in a company-wide people database. Different business functions—such as Finance, HR, or Engineering—would use the same database. Depending on which business function an employee belongs to, she may belong to one of the following group IDs (‘gid’) on the MapR cluster: ‘finance’, ‘engineering’ or ‘hr’.

Depending on which gid a user belongs to, she may or may not have access to an employee’s information.

The following illustration shows how the permissions may be configured. Imagine the JSON document laid out as a hierarchical structure like a tree. The ‘Personnel Database’ table has only one column family ‘default’. The admin ‘root’ manages permissions for the different groups - ‘hr’, ‘finance’ and ‘engineering’. The following is one possible way for the admin to set permissions: 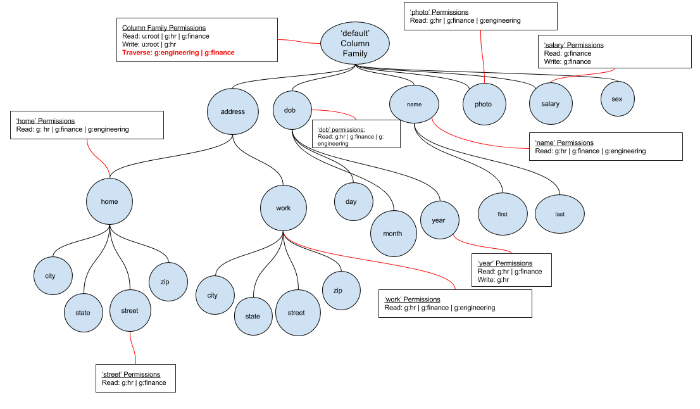 In the illustration, no permissions have been set for the field ‘sex’. In that case, the field is readable by the user ‘root’, or anyone belonging to groups ‘hr’ or ‘finance’ while only a member of the ‘hr’ group can modify it.

However, for the field ‘dob’, a column permission for read has been added so that anyone from ‘hr’, ‘finance’ or ‘engineering’ can read it. An additional column permission for read has been specified for ‘dob.year’ so that no one from ‘engineering’ can read it. Hence, the final read access can be computed as:

Like column family permissions, the admin can set independent read, write, and traverse permissions on a fieldpath or the predecessor of multiple fieldpaths.

While this illustration is by no means the most optimal way to administer security within a MapR Database JSON document, it demonstrates how a database administrator can use ACEs along with placement of correlated data in the same column family in a hierarchical fashion so that most coarse-grained permissions may be specified at the higher levels of the document, closer to the column family, and more specific permissions administered as one goes deeper in the hierarchy of information, along the different fieldpaths.

Let’s look at some really easy ways to begin using ACEs for administering access to JSON documents. In order to understand how ACE syntax works, we have some great docs over at Docs explaining the different parts of an ACE Boolean Expression and how to set it for column families and fieldpaths.

I’ve categorized the most basic use cases for using ACEs. We’ll see how to use ACEs for READ access. The same methods can be applied to manage WRITE access.

Let’s take the example of a taxi trip database. The following is a simplified version of how a trip record may look.

For a taxi trip database table, the admin could lay out the column families as follows: 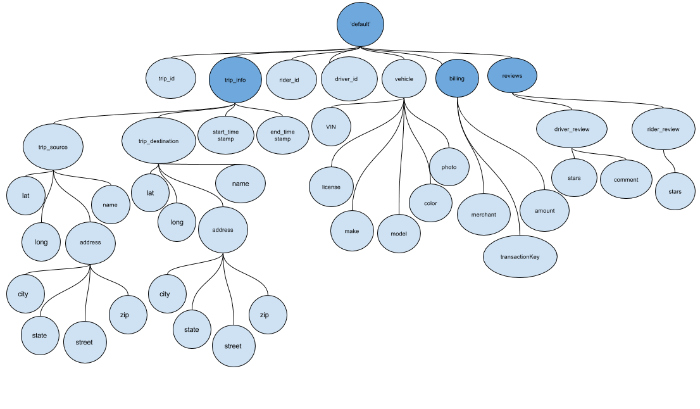 In this use case, the admin wants to grant access to a document or part of a document to a limited set of users and/or groups. 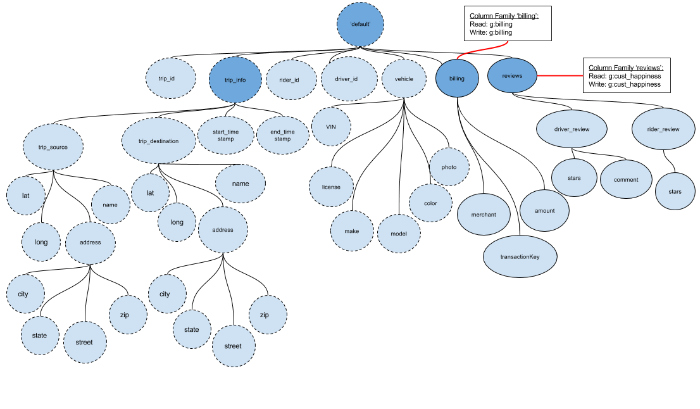 In this use case, the admin wants to deny access to a document or part of a document to a limited set of users and/or groups. 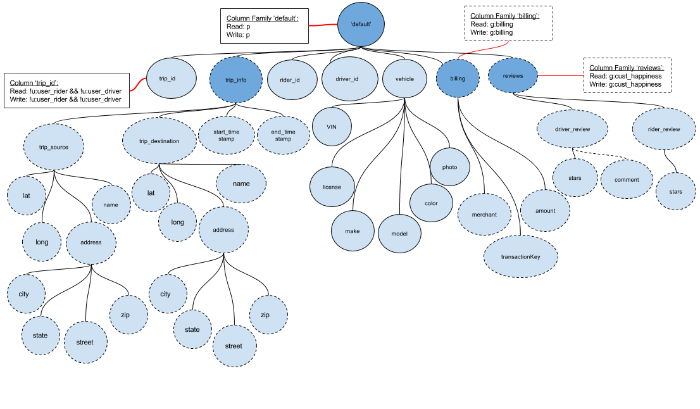 In this use case, the admin wants to provide access to specific parts of a document to specific users and/or groups.

Example: Let’s give read access to both ‘userdriver’ and ‘userrider’ to each others’ reviews but also give them write access to reviews authored by them. The admin can set permissions on the ‘reviews’ column family to allow both the users to traverse the ‘reviews’ subdocument but provide only specific permissions to be writable for these users. 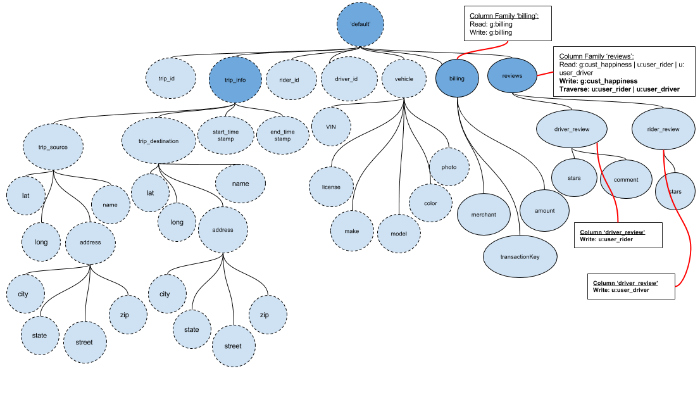 MapR Database ACEs are a very flexible and powerful method for provisioning secure access control for your data residing on MapR Database. If you have questions about ACEs or MapR Database, feel free to ask your questions on Ezmeral Data Fabric Community.