Server management and monitoring often require the knowledge of the state of the managed servers (On, Off....). The Redfish® standard defines the PowerState property with 0 (Off) and 1 (On) as possible values. However, when the system is in the On state, we'd like to know in which sub-state the server is: Pre-OS Tasks (POST), UEFI, OS...

This blog presents the PostState property available in an Oem.Hpe Redfish sub-tree of HPE servers (Gen9 and Gen10) and providing a fine grained server state.

As mentioned in the iLO 4 and iLO 5 API Reference documents, the PostState property can have the following values: Null, Unknown, Reset, PowerOff, InPost, InPostDiscoveryComplete and FinishedPost. Since the first four values have a straight forward meaning, we will only focus on the other ones.

The InPost value means that the server is still performing the Pre-OS Tasks (tests and hardware discovery). With a graphical console opened, when a server is in this state you can see a green progress bar: 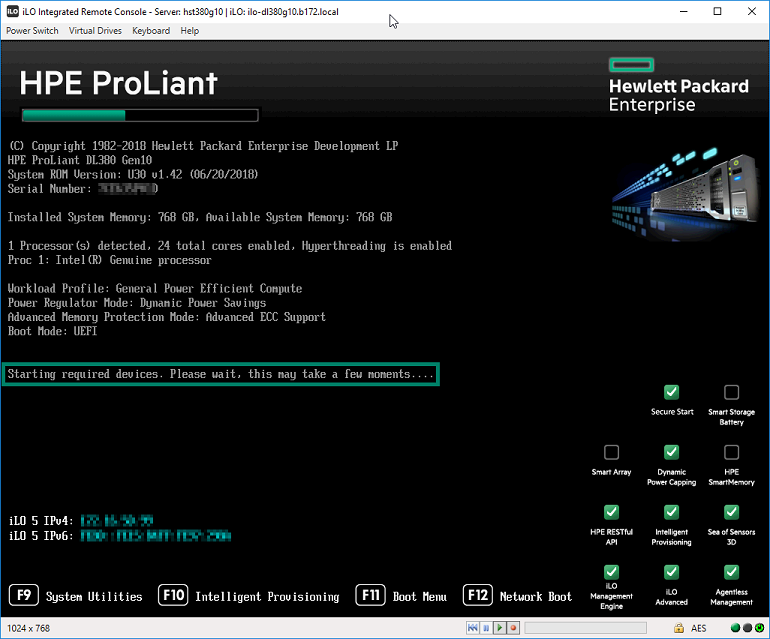 InPostDiscoveryComplete follows the InPost state in the boot process of a server. For the purpose of this blog, we assume that it corresponds to the state in which UEFI is loaded and running: 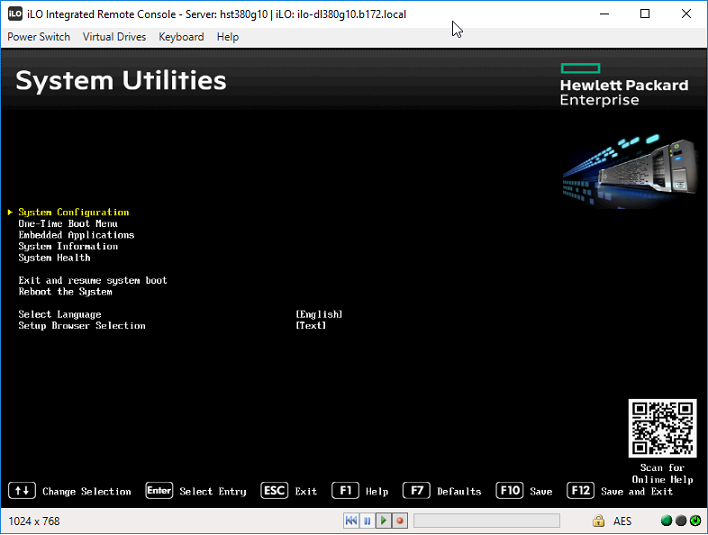 Note that when an UEFI executable is running (i.e. UEFI Shell, grubx64.efi...) the server stays in the InPostDiscoveryComplete state.

The last possible value for the PostState key is FinishedPost. In this state, the server is either booting an installed OS or has completely finished its boot process.

The first obvious use case for probing the PostState of a server or a set of servers is in a monitoring application. Combined with the health status of the different components of the server, you will be able to draw dashboards or create reports.

In the following screenshot we use ilorest to change the next boot entry of a server being in the InPostDiscoveryComplete state. In this case, the iLO returns a [400] error code with an explicit message. 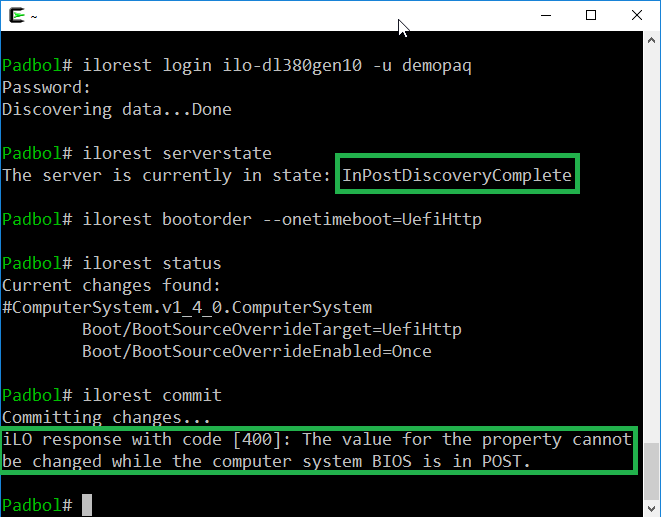 In a Bios and/or storage controller configuration process, the PostState property plays a crucial role. As explained in Setting Bios and Storage Controller Properties with Redfish this process is performed in two phases: 1 - parameter setup into a Redfish pending area. 2 - Reset / Cold Boot of the server to trigger a POST during which the new settings will be verified and transferred, if validated, from the pending area into the active area.

When the modifications are not validated during the second phase a message explaining the problem can be retrieved once the server is in the InPostDiscoveryComplete or FinishedPost states.

Hence, as a best practice, it is wise to pool the managed nodes and check for possible error messages when they are in one of those states (InPost or InPostDiscoveryComplete).

How do I retrieve the Server State

The easiest way to obtain the PostState of a server is to issue the serverstate macro command of the ilorest utility. ilorest automatically detects the generation of the server (Gen9, Gen10...) and fetches the PostState value from the right Redfish path.

The Open Source version of ilorest contains the source of this ServerState macro command in python. Feel free to consult it.

If you decide to create your own application you will have to adapt your code to the potential Redfish data model changes between the different generations of servers or iLOs.

The HPE Agentless Management Service is your friend

In the above PostState paragraph, we learned that the FinishedPost state corresponds to both a system booting an OS and a system with the OS ready to be used.

What if the system is stuck in the boot process and never reaches the target level required for being fully operational? How your monitoring or management application can detect this kind of embarrassing situation?

There are multiples ways to solve this problem, including the use of ping, ssh or SNMP queries to the host OS. However, this is not always possible or desired.

An alternative is using the HPE Agentless Management Service (AMS) combined to Redfish.

The AMS is a very high level service running in a bare-metal Operating System and communicating with the iLO through an internal path (CHIF driver over PCIe bus). Among other things, it communicates the OS hostname to the iLO which stores it in the HostName property of the /redfish/v1/Systems/{item} sub-tree.

By setting this resource to a null or known string when the server is Off, and then by polling it regularly during the boot process you can detect its change and conclude with a small risk of error that the OS is running fine.

It is mandatory to initialize the HostName property before the OS deployment or boot process because once set, Redfish caches it to make it persistent across reboots. Perform this configuration with an HTTP PATCH toward /redfish/v1/Systems/{item}/ and a payload similar to: {"HostName": ""}

Note that this resource can only be modified when the system is Off or in FinishedPost state. Said differently it cannot be modified in InPost or InPostDiscoveryComplete states. This gives the assurance that only a limited number of entities can modify it: An end-user through the iLO GUI, the Redfish API and the Operating System.

In summary, the deployment process of a bare-metal server could be written as:

Restriction: The configuration of the HostName property using Redfish on Gen9 servers is possible with firmware 2.60 or later.

In addition to the PowerState and PostState properties, the DeviceDiscoveryComplete collection returns the discovery state of the AMS, SmartArrays (if any) and a third generic state for all other devices.

It may happen during startup that a system returns InPostDiscoveryComplete while not all of its devices have been discovered.

The following script polls every other second the PostState and the DeviceDiscoveryComplete properties:

The following picture shows three iterations of the the script during the start of a server. In iteration 55 the server is InPost while the SmartArray is in a Cached state meaning that it will answer queries with cached data.

Two seconds later the next iteration returns the InPostDiscoveryComplete state and shows the SmartArray in Busy mode which means that it will return an error if queried during this state.

In iteration 62 we are still in InPostDiscoveryComplete but both DeviceDiscovery and SmartArrayDiscovery have reached their final Complete state. Hence the the corresponding devices can be queried safely. 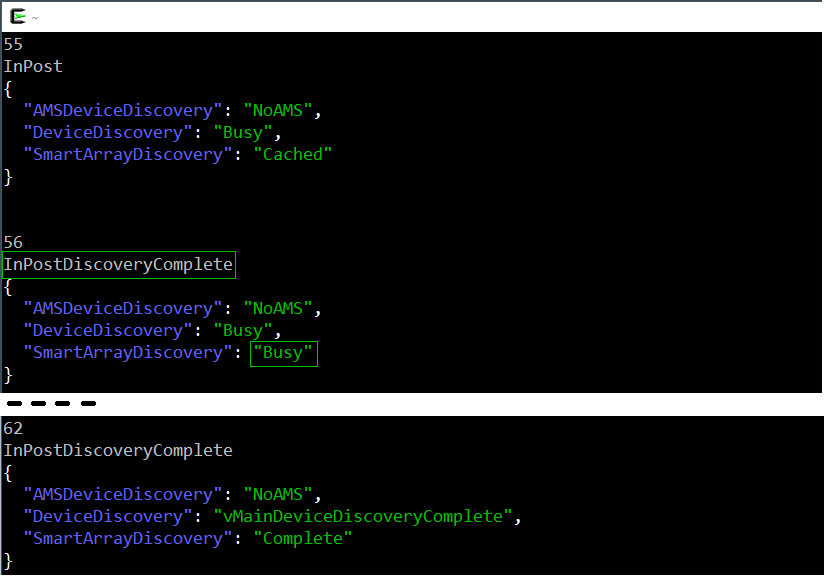 Combining the PowerState Redfish property with specific HPE features like the PostState, DeviceDiscoveryComplete and the Agentless Management Service, you will be able to increase the efficiency of your monitoring and management applications.

HPE provides as well a rich Redfish ecosystem including the free ilorest tool, its Open Source version and a Python library. PowerShell developers have the possibility to use a set of specific Redfish Cmdlets required to run the GitHub ProLiant SDK.

In addition to the above, technical Redfish videos can help you learning more on this new way for managing servers.

Contribute to the HPE Developer Blog