Dockerizing your NodeJS based backend Applications

Hello developers! In this blog post, I will take you through a step-by-step procedure that uses best practices to dockerize your NodeJS backend applications. To better understand this tutorial, the reader should have some basic familiarity with Docker as-a-container technology and NodeJS-based backend applications. Briefly, NodeJS is the most popular JavaScript-based server side ecosystem. It is mostly used to build highly scalable, fault tolerant microservices-based backend enterprise applications. Many enterprise application developers prefer NodeJS over other programming languages, such as JAVA, because of its light memory footprint, event driven, non-blocking model. NodeJS is also very popular in building end-to-end applications in JavaScript, typically using MEAN (Mongo, Express, Angular, Node) and MERN (Mongo, Express, React, Node) stacks. In this post, I do not intend to focus on NodeJS-based application development, but rather on how to dockerize already developed NodeJS based applications.

Let’s first try to build a sample web server using express, which is a NodeJS package. Express is a node package typically used for building REST APIs in server side JavaScript. Below are the steps we are going to perform in this article:

Pre-requisite: you must have latest version of Node and Docker installed on your machine . ( Supported platform are Linux/windows/MAC). Throughout this article , i will be using docker for windows 10 using Hyper-V hypervisor . Follow the official documentation to install Node and Docker on your platform.

STEP 1: Create and initialize a sample NodeJS based application

Create sample project directory as below:

Initialize the NodeJS project using node package manager (npm). It will generate a project skeleton with a package.json file (also called project descriptor) which carries all the meta data and dependencies information for your application.

Once the project skeleton is ready, edit the "scripts" section of the package.json file as shown below:

In order to build a web server using NodeJS, install the express package using npm as below:

By this time, your package.json should look as what’s shown below:

Once we have the project skeleton ready, let’s add express code to build a simple web server that listens on a certain port, for example, port 4000.

Now that we have the Node express server ready, let’s run it!

Once you have started the web server using the above command, you will see the following on the console:

Then, you can access the application on http://localhost:4000 in a browser.

Okay! Now we have the simplest possible NodeJS backend application running on port 4000.

Now, let’s create a Dockerfile in the project directory.

Simple enough. So, now we have the smallest possible Dockerfile. Let’s move on to the next step .

We have found a problem: We need a Docker base image that has node and npm already installed.

Problem resolution: Why we are getting this error? To better understand this, you need to understand on what basis to select the base images in your custom (or project specific) Dockerfile. The rule of thumb is that you should choose your base image based on what programs you need to build your custom image. In this case, npm is the package manager for node and it is required for installing dependencies that your project needs inside the container. In Docker world, alpine images are very small in size (just a few megabytes) and the alpine image we selected does not seem to have npm in it.

One way to overcome this problem is to use some other base image that has node and npm installed. The best option in this case would be to use the official base image found on the Docker Hub public registry. On Docker Hub, if we see a full-fledged Node official image tag, its size is probably on the order of 300-400 MB. But we don't need that large a sized Node image. Instead, what we need is just a tiny version of Node image that has at least npm in it. That is why Node also comes with its own alpine tag just like other official images.

Let’s try to modify our Dockerfile to fix this.

Now, build it again with the alpine tag of the official node base image:

We have found a problem: We need to ensure the docker container is aware of our package.json file.

Problem resolution: When you see this warning or error, it is because the node package manager always relies on package.json file (which is generated as part of npm init during project initialization) for the installation of project dependencies. It shouldn’t be any surprise that containers don't have this package.json on its file system snapshot because the whole of our project source code is on a local hard disk. So the File system snapshot found in the container is merely the one which comes from node:alpine base image. One solution to this problem is to make your project source code somehow available in the container. Hence, before we install project dependencies using npm install in Dockerfile, package.json must be made available inside your container file system. The way we do it is to use the COPY instruction of Dockerfile.

Here is the syntax:

Notice that there are various ways in which you can make your source code available to the container. The preferred ways are docker volumes and bind mounts. But in this example, we will directly copy the whole source code into the container file system. Here is the updated docker file :

Let’s build and tag it in order to push it to Docker Hub.

We have now successfully built a docker image for our project. Let’s verify it using the following:

As you can see, we have built the docker image and tagged it. Let’s run it now.

Run the docker image that we built in the previous step and see what happens.

Great! Our NodeJS express server is running. Let’s access our application on http://localhost:4000. Uh oh! Something’s wrong. We are not able to connect to our application. 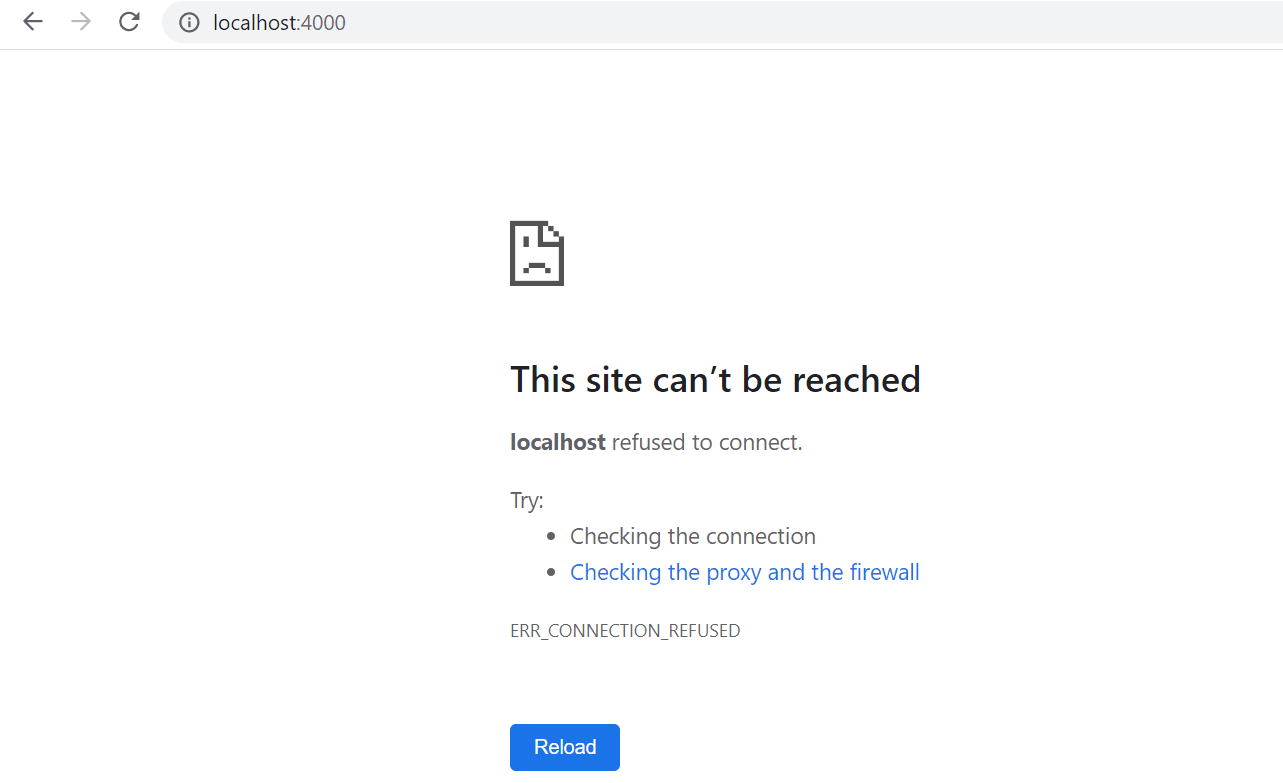 Let’s see if the NodeJS container is running to find the root cause.

Although we have successfully built our docker image and the container is running as well, the application still can't be accessed. As you can see , the PORT column in the screen above is empty. To understand why this is, you need to understand Docker Networking concepts. The port 4000 is inside the docker container, but we are accessing this 4000 on our host where the docker engine is running. One way to solve this problem is to route the traffic that is coming from your local host to the container where our application resides. Each docker container is considered to be an isolated sandbox with its own namespace, port, mount, etc. So, let’s make sure that whenever any request comes from the local host it is routed or redirected to the application in the container. This concept is called Port Mapping at run time in the docker networking world.

Here’s how it looks:

And now we can access our Node application which is running in container!

Let’s see if we can improve on this: Our application source code is mixed with the root file system of the container.

Let’s do it! You can see the application source code, including package.json, was copied inside the root file system of the container. Notice that, in order to avoid any undesired state of your container root file system once it is mixed with the project source code, it is recommended that you choose your own custom application directory inside the container file system. This will help in avoiding any undesired overriding of the file system by your own project source code. We can achieve this by using the WORKDIR instruction in our Docker file. This instruction ensures that any further commands (followed by WORKDIR) in the Dockerfile will be executed relative to WORKDIR in the container

We will use this to optimize our Dockerfile:

Build and tag the docker file

Run the container out of the successfully built image:

Notice that you might get an error here saying:

You can see that all of our project source code is not in the root file system anymore and instead, it is in /usr/mynodeapp/.

There is still an opportunity to improve this docker file. The Node package manager (npm) just uses package.json to install any project specific dependencies and it doesn’t care about the rest of the source code of your application. To further optimize the code, you need to first copy the package.json and then run npm install. Later, you will copy the remaining source code. This will ensure that any source code change in your application does not install project dependencies again and again, and that it does so only when new dependencies are added or an existing dependency version is changed in the package.json file in your project. It is always a best practice to keep the things that more frequently change, such as project or application code, at the bottom of the docker file.

If you have done all this, the new Dockerfile should look like what’s shown below:

Let’s build and tag the image again . Ensure tag name for your image is unique at any point of time.

Once the finalized image is successfully built, we can run the NodeJS container out of it:

Good, so we have the final docker image for our NodeJS based backend application. Let’s push it to Docker Hub.

Once you have pushed your image, this is what it will look like on the Docker Hub public registry.

Even though we have made great progress, we are still left with the problem that for any change in the application source code still requires rebuilding the docker image. Any time we want to modify project source code, we need to rebuild the image again. This is because the source code is still on our local hard disk and it is nowhere referenced in the container and it is copied into the container only when the docker image is built. One way to solve this problem is to use docker volumes or bind mounts, which let you change your source code from local hard disk and have the change reflected in the running container without even rebuilding the image. I plan on writing a follow-on article that will address this.

Along with addressing this issue, I plan on showing you the same application built with multiple containers. We will add some No-SQL backend DB, like Redis or Mongo to the NodeJS application service layer. It will be a multi-tier app with a proper service and database layer. We will leverage docker compose to run both containers; one for database and one for express server and see how they interact with each other. As a full-stack developer with a sincere passion for the latest software technologies, I like to help others by writing tutorials like this. I hope you enjoyed my post. You might want to check out another post I wrote here. Keep checking back on the HPE DEV blog site for new and interesting articles on containers!

Best Practices for Migrating Your Apps to Containers and Kubernetes

Containers vs. VMs: A 5-Minute Guide to Understanding Their Differences

Dockerizing your NodeJS based backend Applications